The weather has really been wonderful for us so far, until today. We drove in rainy, windy weather an hour to take a ferry in rainy, windy weather another hour to arrive on the Aran Island of Inishmore, in rainy, windy weather. Ryan saw dolphins swimming along side of the ferry, but I was too busy sleeping trying to avoid the motion sickness. The original plan was to rent bikes and bike around the small island to the various sites. That was quickly nixed (I am only a fair weather cyclist) for a small 15 person bus tour given by a local named Rory. It turned out to be pretty good. He drove us around to all the sites, stopping along the way to point out of things of interest and answering all our questions about life on the island. During the long stop at Dun Aengus, Rory picked up his maybe 10 year old son and his friend, who joined us on the second half. I asked what his son did during the summer, and it sounded exactly like kids in the US; soccer camp for two weeks, swimming camp for two weeks, music camp for two weeks, etc. The island is about 15 km tall by 4 km wide and has 14 separate villages. Residents must take the ferries (or the plane) over, so are limited getting to and from the island. The schools are taught in Irish, and some kids from the mainland come to school on the island primarily for that reason. They take a ferry over at the beginning of the week and then stay with families and head home for the weekends. The island also has its own nursing home, but has a shortage of nurses. 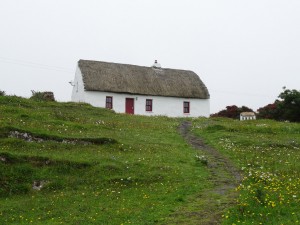 Thatched roof houses that used to be popular on the island

Dun Aengus is the main site on Inishmore. It is a prehistoric circle fort sitting on a cliff, dating back to 1100 BC. The fort was updated and added on to multiple times, they think around 500 BC and then multiple times afterwards. There is still a lot of unknowns surrounding the exact timeframe of the construction of the fort. 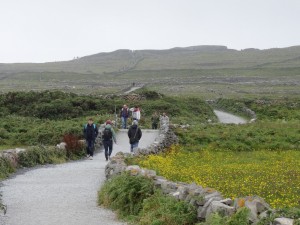 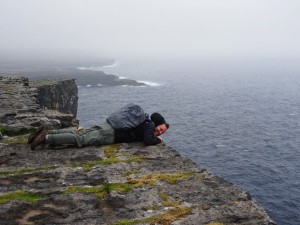 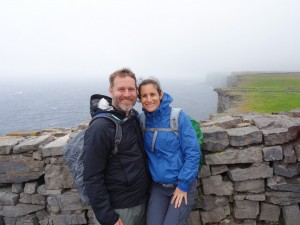 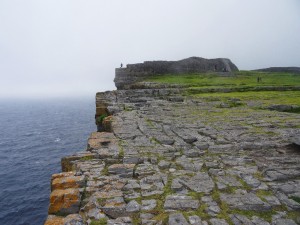 The seal colony is one of the other big attractions on the island. One large seal was lounging on a rock, while another one kept poking his head out of the water to say hi. 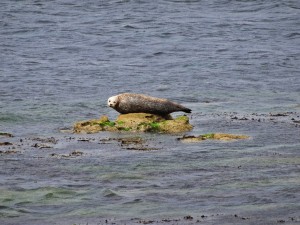 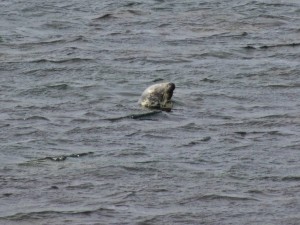 After our tour, we had some time to spare and stopped for a light snack and drinks. Ryan’s first Smithwicks of the trip! 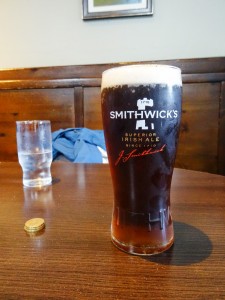 Luckily, the ferry ride back was not quite as rough as the one over. We were beat from the day and decided to do a light snack/dinner in the hotel and go to sleep.

P.S.  Well, we made it over half way through the trip, to August 15th, the date of this posting . . . But it wouldn’t be a trip abroad if Ryan didn’t get sick.  Hopefully, it is just a mild cold and passes quickly!  The local pharmacy gave him some stuff to take, and he brought some amazing nasal spray he bought in Norway last year when he got sick.  Keeping fingers crossed.