Just to make sure our memories of the trip are meteorologically accurate, it rained on our 5 minute walk with luggage to the bus stop.  Then the Aircoach bus drove right by us and we waited outside in the sometimes pouring rain and gusting wind (my umbrella kept turning inside out) for 22 minutes until the next bus came.  Great way to start a 14 hour journey home. 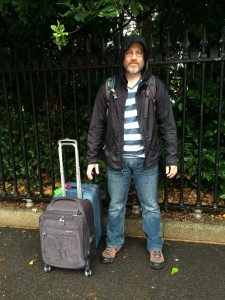 Someone does not look very happy waiting for the bus

We arrived at the airport by 10:04am for our 12:25pm flight.  Not as much time as we would have liked, but we thought sufficient.  Until we stood in a very slow (though not long) line for almost an hour before they had the D.C. bound passengers form another line because the Newark flight mixed into our line has significant delays.
Then we get to security . . . 2 times.  The first security was for all passengers, very similar to in the U.S., but they only made some people take off their shoes after looking at them.  Ok, put away the laptops, liquids, gels, ready to move on.  Next, we follow signs for the United States pre-something, where we are forced to basically go through the same security protocols again.  Except this time, we need to take off our shoes.  However, one line had an xray and one line didn’t, so we chose the one that didn’t.  Love the consistency!
The good part is that Dublin airport basically has U.S. customs in it.  Rather than fill out the customs form on the plane, we could do it at kiosks and then see a customs agent and we are all done, no customs in the U.S.  Of course, the customs agent made me throw out that dangerous Irish banana I was going to eat at the gate before departure.
Besides all that, the flights home were quick and relatively uneventful.  We did have a 2 hour layover in Dulles, where we walked the terminal end to end 4 times; must keep up Ryan’s step count!