Friday was another day of mostly wandering around and enjoying the weather. Ryan and I were originally planning to do a hike, but slept in too late. Egg doesn’t do nature, so he and Kate were going to hang out in the city and take in more sites. Once we decided not to go hiking, we walked over to the museum quarter and had a relaxing, delicious breakfast (except for all the bees). 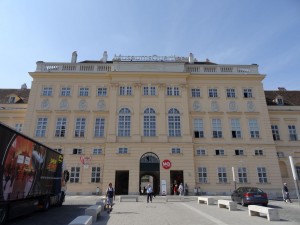 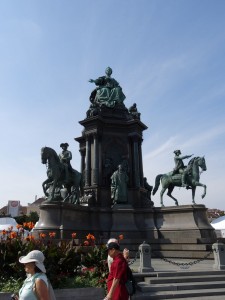 Egg and Kate were unfortunately thwarted on their plans. They missed the 11am St. Stephen’s tour, even though they were there at 10:58, and were told that the rest of the tours for the day were cancelled due to an afternoon event. They then walked over to the Stadttempel, and were told that they could not walk in for a tour, but could come back with their passports and be allowed in to services.

Ryan and I wandered over to meet Egg and Kate, passing a few sites along the way. We walked into the part of St. Stephen’s Cathedral that was opened, getting a decent look at the cathedral and listening to a choir warming up. 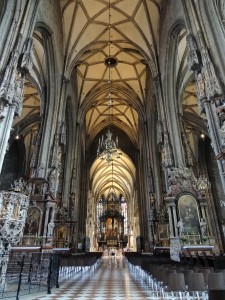 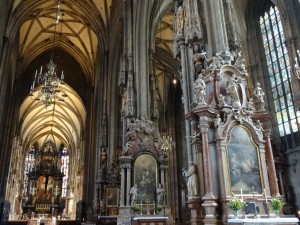 The four of us then visited St. Virgil’s Chapel, a chapel located in one of the underground stations. Built in the 1200s, it had been buried and was only rediscovered while building the underground in the 1970s. 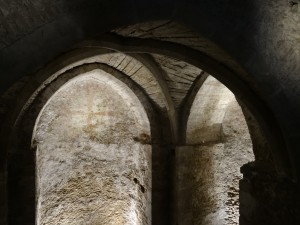 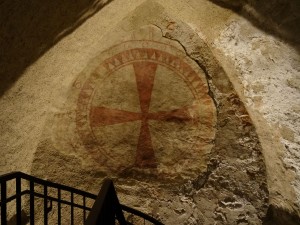 Ryan and I wandered back slowly to the Airbnb.  Vienna has beautiful buildings, churches, and statues at every turn. 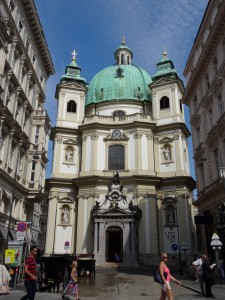 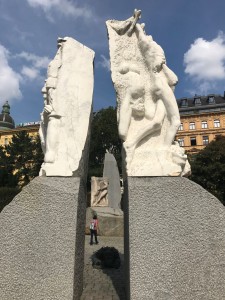 Monument Against War and Fascism 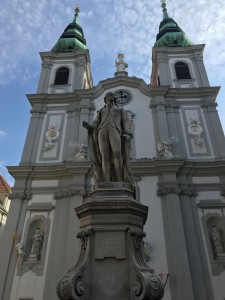 Time for FaceTime!  This was the first time FaceTiming with Sam since we left on Monday. Ryan’s parents drove down to Texas to watch Sam for most of our trip. And then my parents have him for the last few days. I was a little concerned, because Kris said Sam has been missing us, and I wanted to make sure he didn’t think we had abandoned him. His teacher at school said that when they talked about mommy and daddy at lunch, Sam started to cry :-(. Sam keeps walking into our bedroom looking for us. Kris told him we are on a plane, so every time mommy or daddy is mentioned, Sam does the sign for plane. According to Sam, we may be on an airplane for the entire trip. Luckily, FaceTime went pretty well. Sam told us what he ate from breakfast, showed us his Samstorm (tissue paper torn up that he likes to throw up in the air and lay in), and sang wheels on the bus. At the end of the call, he kept saying ‘No, no’ when we were getting ready to hang up, which was sad. He’s doing fine, I’m probably having a harder time.

Time to catch the tram and underground to the MuTh for the Vienna Boys Choir. This was my first time riding the public transport in Vienna. As Egg had said, actually paying for public transport appears to be optional. As opposed to the US, where there are gates that one must pass through, or a bus driver checking passes, Vienna has these small readers where you can validate your pass. The pass readers do not have gates and in no way stop one from entering. The bus and tram drivers also do not check or ask people to validate their passes. The public transport runs frequently and is very easy to use. 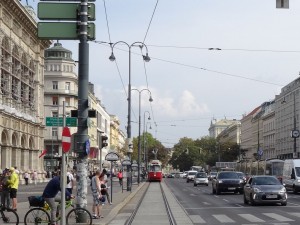 The Vienna Boys Choir was a lot of fun and very good. The conductor had a ton of energy (spunky, as Ryan said) and all the boys looked to be enjoying themselves. They sounded amazing and sang a few well known pieces by Strauss, Haydn, Rogers and Hammerstein (Edelweiss). The venue was very intimate and all seats had great views of the stage. At Kate pointed it, these incredibly talented boys could sing in unison, but are still kids and couldn’t manage to coordinate their bows. Every time they took a bow, it’s as if they would all sneak looks at one another saying “Now? Is now the right time?”. At one point, one of the boys went to bow and then made a motion to the others like “What are you doing”? Regardless, they sounded great and were a lot of fun to watch.

After the show was wonderful dinner at an Egg chosen establishment. Delicious dishes all around.