So sad to leave! Silvia (Airbnb owner) showed up promptly at 5:28am to check us out, and we were headed out to catch the airport bus a few minutes later. The bus ride was a piece of cake, we had purchased tickets the night before and the stop was right across the street from our Airbnb. The adventure started once we got to the airport.

Check-in for the flight had not opened yet, and we stood around in crowds until it opened, 2 hours before the flight. Similar to the way there, had a layover in Istanbul.  Getting through security was easy and fast, and we had plenty of time to get some breakfast and some last minute souvenirs. The Budapest to Istanbul flight was short and uneventful, and I actually don’t remember anything about it.  Istanbul to Chicago turned out to be a bit more interesting.  Luckily, we decided to head to the gate early, where we then proceeded through 3 checkpoints where our boarding passes and/or passports were checked, and one where are bags were checked and we were patted down. Phew! Reminded me a little of Panama, where we had to move away from the gate so security could then screen us again (and take our just purchased sealed beverage bottles). Finally done with all the security, sort of.  There was one woman trying to bring either three bags of coffee or three bags of sugar (Egg thinks coffee, I thought it was sugar).  She and her traveling companion didn’t seem to understand that airport security was not going to let them bring it on board.  Honestly, I don’t exactly understand why.  Either way, the guy kept saying, it’s ok, it’s mine, and the security kept telling him, it doesn’t matter who it belongs to, you can’t bring it on board.

Egg says that Ryan and I are cursed when it comes to travel. At least it appears that way for this trip. There were operational problems with our plane. The flight was delayed 20 minutes, then another 30 minutes, then two hours. At that point, the airlines gave us food and drinks, which is never a good sign! After that, they changed our gate. Luckily, we all stuck around, and just got shuffled up to the new gate. Anyone who had wandered off had to go through the at-gate security process again! Being delayed did allow us to FaceTime with Sam before he left for school. Pretty sure he was more interested in the chocolate milk mom was giving him for breakfast than actually talking to us.

We boarded the plane and got to our seat, where there was a small boy, maybe about 5 years old, standing with a large bag. He didn’t speak English and we weren’t quite sure what to do. Eventually, his grandmother came from further back in the plane to fetch him. Our row, bulkhead, consisted of Egg and Kate on one side, Ryan and me on the other, and a family with two kids, 3 years and 1.5 years, in between us. The row behind us had another baby, and they were all playing musical chairs with the bassinet in the bulkhead.   I cannot imagine traveling with little kids on that long of a flight, but I guess you do what you have to.

Wednesday was our last day in Budapest, and we packed it with sites and fun. First stop was the Dohany Street Synagogue, where we took a tour, learned the history of the synagogue, visited the gardens with the Tree of Life Memorial, and listened to a Klezmer band. The synagogue is the largest in Europe. The architects did not know what a synagogue should look like, so they built it like a cathedral, with an organ and the small raised pulpits on the sides. The synagogue was bombed during WWII, and Estee Lauder and Tony Curtis provided a large percentage of the funding to restore and renovate it in the 1990s. We really enjoyed listening and clapping to the Klezmer band that played in an auditorium on the grounds. 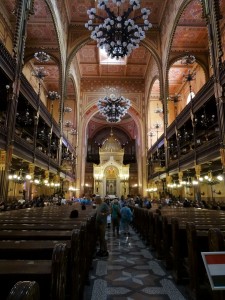 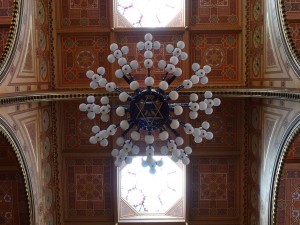 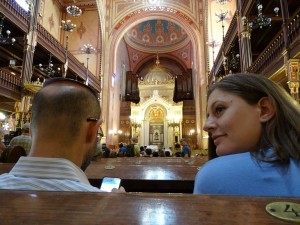 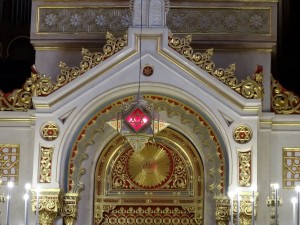 Next up was the parliament tour, that Egg scheduled in advance because it is so popular! The House of Parliament, as can be seen in some of the previous photos posted, looks more like an ornate castle than a government building. The building was gorgeous and filled with gold decorations. 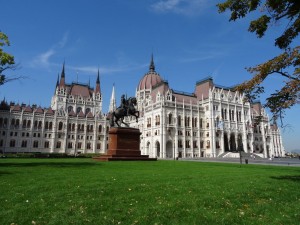 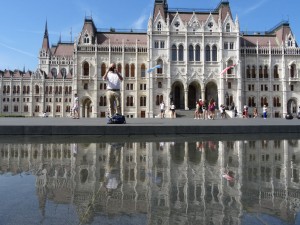 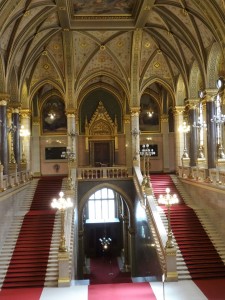 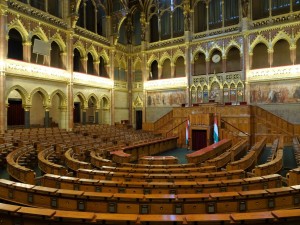 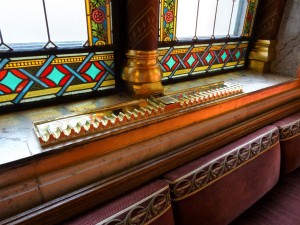 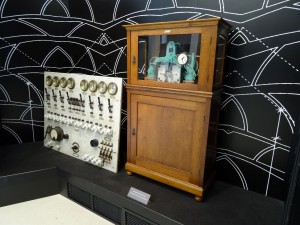 After the tours, we grabbed some delicious lunch and went to checkout the Szechenyi Baths for some relaxing before the day of travel ahead. 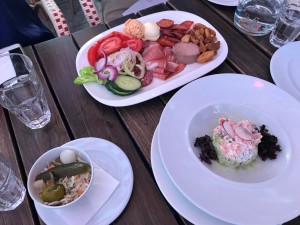 The baths were huge, with 18 hot pools (indoors and outdoors), saunas, cabanas, massage rooms, and who knows what else. It was actually a surprise that we all found one another, after going in different entrances and splitting to go to locker rooms. We settled into a large outdoor pool, alternating between floating in the water and cooling off on the chaise lounges, and doing lots of people watching. Ryan was introduced to the European style of women’s bathing suit, not quite a thong, but also not quite covering all of the wearer’s tush either. What a great way to finish up our vacation! (I mean the baths, not the bathing suit bottoms) :-). 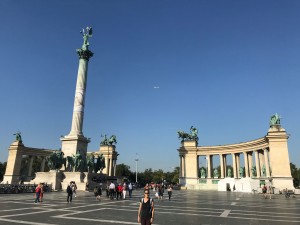 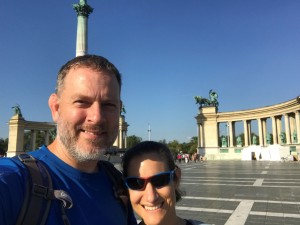 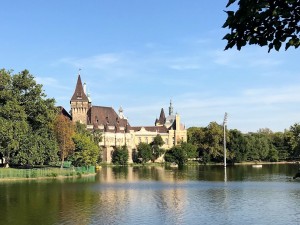 Castle in City Park, across from Heroes Square 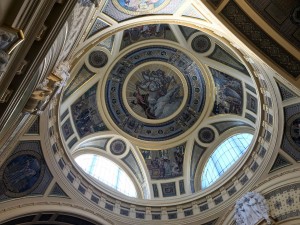 Once of the many entrances into the baths 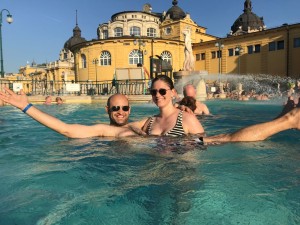 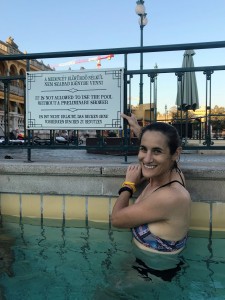 The evening was spent snacking on leftover sausage, cheese, and bread, packing, and taking a walk out for rose gelato. 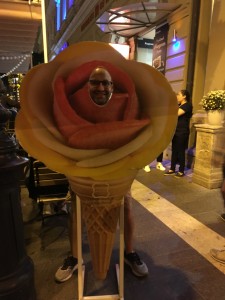 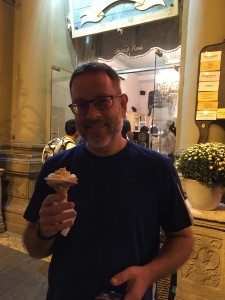 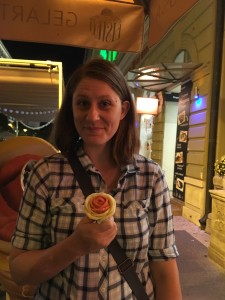 The currency in Hungary is called the Forint, but being Americans, we kept referring to it as Fortnights.