Light day today . . . driving from Ashford Castle over to Clifden, with a few stops along the way. First, I got to visit with the Irish Wolf Hounds at Ashford Castle before breakfast. They are very large (150 lbs) and very calm, letting everyone pet them. Funny to see dogs that large roll over on their backs to have their bellies rubbed. Unfortunately, then it was time for breakfast and to check out of Ashford Castle. 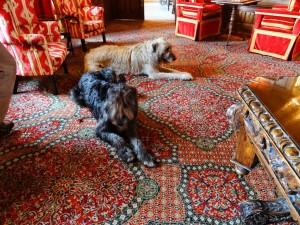 The drive to Clifden, via Kylemore Abbey, should have taken about 1.5 hours according to Google, but as we have learned, everything takes longer. The roads are narrow (VERY narrow in some spots), with no room for passing, so if a slow car, or biker, or something else (like a sheep) winds up in the road, it could definitely delay travel. 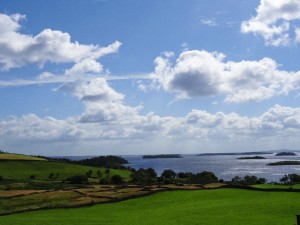 Views of the Atlantic Ocean to the west

Views of mountains to the east 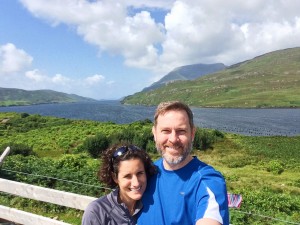 Killary Harbour – Killary is one of three glacial fjords in Ireland

Speaking of sheep, these are the first escapees I saw, up on a hill on the side of the road. Soon after, we saw a ton more along the road, and have since witnessed them easily jumping the stone fences frequently used as enclosures. Mystery of the escape solved! We have also resolved the painted sheep. The markings are used to identify 1) which sheep belong to whom and more interestingly 2) which ewes have been impregnated. During mating season, sometimes “a ram will be fitted with a bag of dye around its neck and chest. When the ram mounts the ewe a bit of dye will be deposited on the ewe’s upper back.” Fascinating. 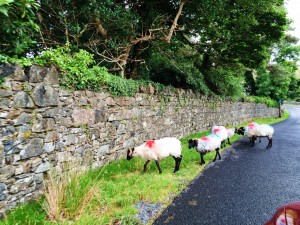 We stopped at Kylemore Abbey, which was teeming with tourist buses. Kylemore Abbey is a neogothic country house currently home to Benedictine Nuns and known for its beautiful Walled Garden, mostly what I was interested in. Ryan just read out of the guide book that in 2015, Notre Dame (the university in Indiana) signed a 30 year lease for summer classes and student housing at the Abbey. However, we saw no signs of the Fighting Irish. Ryan and I opted for the longer, Woodland Walk over to the Walled Gardens and only ran into two other people on the whole route. The Walled Gardens were huge gardens with sections including herbs, a rock garden, ponds, traditional Victorian gardens, and greenhouses. It was starting to rain, so we headed for some food (big surprise) in the tea house before walking over to the Abbey itself. 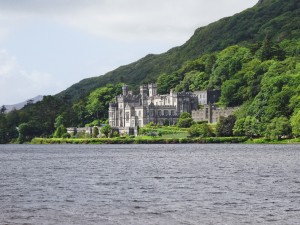 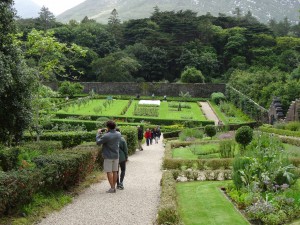 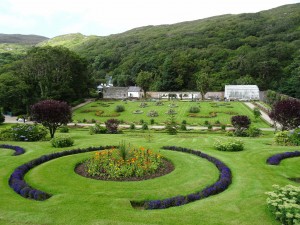 Dinner was at Mitchell’s Seafood Restaurant in Clifden, a short 5 min walk from our B&B; Killary mussels and Irish lamb stew. Ryan said those were the best mussels he has ever eaten, and probably the freshest, as we drove by the Killary Harbor where they were being harvested.