We arrived in Bergen around 11am on Saturday, June 20th. The plan was to take the bus into Bergen, which we quickly learned was easier said than done. Taking the bus itself was easy, trying to purchase tickets from the machine was a bit more challenging. The sign on the machine translated roughly to “only short cards”. Huh? Everyone else attempting to buy tickets also had problems. After a few of us trying with credit cards, Dan finally got his debit to work, and we all loaded on the bus.

Bergen is a beautiful city on the west coast of Norway, the second largest city after Oslo. The city is in an area known as the ‘Seven Mountains’, which we personally experienced while dragging our bags from the bus stop down near the quay up the steep cobblestone streets to our lodging.

This was the first time Ryan and I had used AirBnB. Turned out pretty well, very small flat, but clean and in a good location. The owners lived on the 2nd floor and were available for anything we needed. We took a nap and showered, and met back up with Adam, Dan, Loan, and Kerwin (thinking this needs an acronym, cause I’m not going to want to type it over and over; how about KLAD?). The weather was beautiful, a trend on this trip, so we walked around the town, over to the Bergenhaus castle, with view of Rosencrantz Tower and Hakon’s Hall, down to the quay. Ryan and I were having some camera issues at this point, so most of our pictures are out of focus. Luckily, the issue seemed to resolve itself. 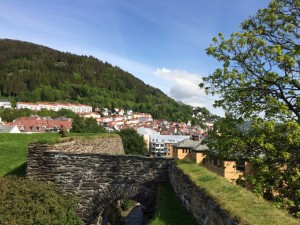 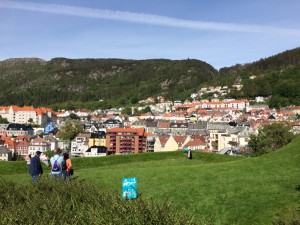 During the summer months, all the bars along the water, called Bryggen Quay, have tables and benches setup outside, where people sit and schmooze till midnight throughout the week. We stopped at the fish market to pick up some very fresh fish for dinner. The market was relatively small, maybe about a 100m of sidewalk with vendors (mostly fish) on either side. Ryan and I got kabobs, with shrimp, salmon, and cod. The shrimp and salmon were delicious; Some of the best salmon I’ve ever had. I also had samplings of reindeer and whale sausage, both of which just tasted like sausage. 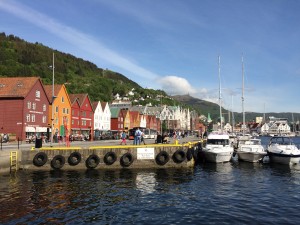 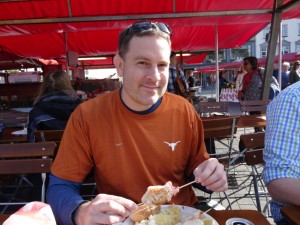 After dinner, we took the Floibanen funicular railway up to Mount Foyen to enjoy the beautiful view of the city. 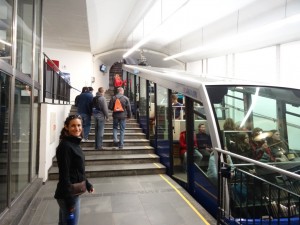 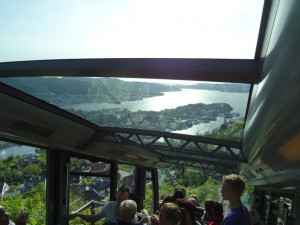 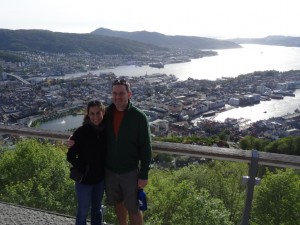 View from the top

We walked back down, through the troll infested woods and past the invisible witch. 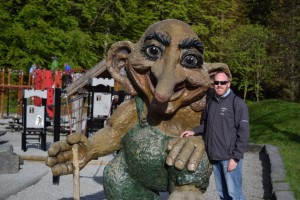 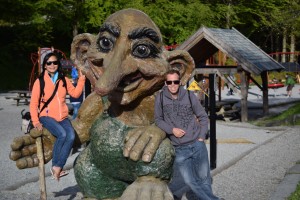 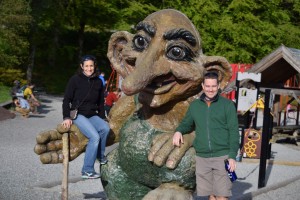 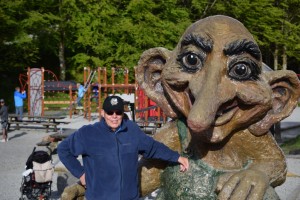 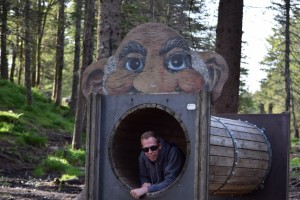 Troll pictures above courtesy of Loan.

The guys couldn’t pass up joining the late night crowds sitting outside at the quay, and we stopped there for a drink before heading to bed.

P.S. Loan took some amazing pictures throughout the trip, some of which I’m including in the blog.  I will try to give credit whenever possible.

Last year, Ryan’s cousin Adam told us about a trip he, Loan (girlfriend), Dan (brother), and Kerwin (father) were taking to Norway. Ryan and I never pass up a chance to travel to a new place, so we asked if we could tag along. Luckily, the timing worked out perfectly for us, and we were able to join them. 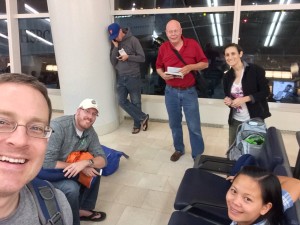 Selfie at JFK: Waiting for our flight

Huge thanks to Adam and Dan for planning an awesome trip! Ryan and I were total slackers, barely looking at any plans until two weeks before the trip. Adam and Dan planned a great route, starting in Bergen, heading down to Pulpit Rock, up to glaciers in Jostadalbreen, continuing up to Alesund, across to Ringebu, followed by Lillehammer, and finishing in Oslo. While it was a lot of driving, we really enjoyed having the flexibility of a car, and the view around each curve was more breathtaking than the last, and there were a lot of curves.